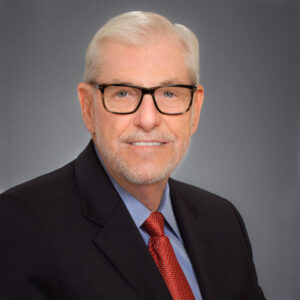 Michael Quinn has over four decades of experience in the water and wastewater industry. He served as President & CEO of SouthWest Water Company from 2013-2018 and spent a number of years in California as the President of Suburban Water Systems, the company’s largest business unit, from 1996 – 2013. Mr. Quinn was also President of SouthWest Water Company Utility Group from its inception in June 2002 until December 2009.

After serving for the Air Force in Vietnam, Michael’s long career began with SouthWest Water Company in 1970 and has included several key operational positions since then. Michael was raised in Arkansas and then made his way over to California State University at Fullerton to earn a bachelor’s degree in business management. From there, he moved into Suburban’s accounting department, becoming Controller/Treasurer in 1981. In 1985, he was named President of ECO Resources, Inc. In 1992, he returned to Suburban as Chief Operating Officer, a position he held until 1996.

Among his water industry affiliations, Michael is a past president of both the California Water Association and the National Association of Water Companies, and represents SouthWest Water as a member on the boards of the California Domestic Water Company and Covina Irrigating Company.  He also is a past director of the Main San Gabriel Basin WaterMaster.